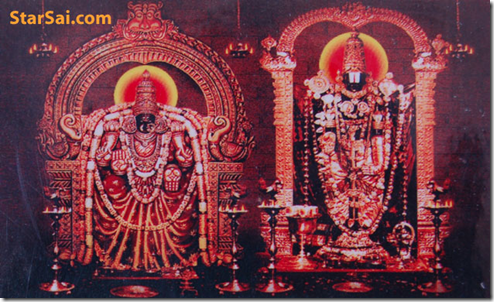 I think this is ancient real photo of Lord Sri Venkateswara and Goddess Sri Padmavati though not sure!

This is the real video of Lord Sri Venkateswara of Tirumala.
The Lord appears to the devotees for all the days in a week with broad milky white Karpoor Naamam - except
(a) on Thursday nights after the Poolangi Seva
(b) Next day (Friday) morning after the due Abhishekam - the deity appears without Naamam. That is called "Nija Rupam" or "Actual Statue".
This video was shot on a Friday in 1952 when Sukravara Abhishekam was being performed to the Lord and hArati being given to the Lord after the Abhishekam. The Lord appears here in "Nija Rupam"


Many videos are found on youtube regarding this, but most of them are more or less part of this same video with lesser clarity. One more video you may want to watch is:
http://www.youtube.com/watch?v=vCW5uJOVJJE
which is a mobile capture of the footage shown in Star news on 29th Jan 2008 in the afternoon. Though initially not so clear to watch, later on it is ok to watch. But it also appears to be part of the above video again. But then I feel the Lord's face is closely shot in this video compared to the above video.

Om Namo Venkatesaya
Posted by A Telugu Guy at 05:55 No comments:


The links to the pdfs are given below. Click on each link and download the files. The slokas are written in 3 languages: Telugu, Sanskrit and English, while the meaning of each sloka is written only in English.
Read at least one sloka (three is much better in the case of "at least", while the maximum is unlimited!) with its meaning each day and get the divine grace of Lord Sri Venkateswara!

Om Namo Venkatesaya
Posted by A Telugu Guy at 10:57 4 comments: Pullaiah's remake of his 1939 biographical of the Tirupathi temple deity is a milestone in NTR's acting career. Balaji (NTR) descends to earth following a celestial problem caused by Narada. On earth, as a common man who is nevertheless recognized by all the 'good folk' as the god, he falls for Padmavathi (Savitri). In the end, as two earthly women, the 'heavenly' Lakshmi and Padmavathy, battle over him, he turns into a statue. The film then turns into a documentary on the Tirupathy temple, before the populist ending restores the god to his true devotees as against the Brahmin clergy.

In spite of the shift from celestial grandeur to semi documentary earthliness, the film seeks to induce a childish religiosity, e.g. in the sequence where Balaji is fed milk by a cow, the udder and his mouth being framed, in close up, by a rock


The art of making a film that remains evergreen is certainly no easy task. It requires high artistic talents, and great vision on the part of the director as well as the producer. Only a combination of imaginative and intellectual brains can create history in any field. Here we are discussing a memorable film that even after several decades stands as testimony to the high standards of Indian cinema of the olden days. 'Venkateswara Mahathyam' is an example of the high entertainment standards of the days gone by.

It was first made in 1936 by P Pullaiah under the Famous Films banner with greats like CSR Anjaneyulu and Shanthakumari in the lead roles. It turned out to be a grand success and set the trend of grand stellar combinations. Shanthakumari who played Padmavathi in the film at once became the heartthrob of that generation with thousands of admirers eager to see her again and again. The movie was said to be among the successes of the early days of Pullaiah and Shanthakumari's married life.

Generally, no producer dare make the same film a second time, though the first version of it has been a sensational hit and earned director the good will of the spectators. But P Pullaiah in his movie career of 50 years created history by remaking the 1936 film in 1960, this time under the Padmasri Pictures banner, with a change in the lead pair. While the matinee idol NT Rama Rao appeared as Srinivasa, the talented and glamorous Savithri attracted thousands of admirers as Padmavathi. Shanthakumari this time took on the role of Vakulamala. Gummadi as Bhrigu and S Varalakshmi as Sri Lakshmi performed impressively. This galaxy of talented artistes really created waves in the history of the Telugu cinema. A good number sincerely believe that this film evoked a great sense of devotion among the filmgoers!

Two literary stalwarts Duvvuri Ramireddy and Athreya wrote the dialogues for the first and the second production respectively of the movie. Though times had changed Athreya wrote the dialogues to suit the changed tastes of the new generation. In fact Athreya played three roles in shaping the movie - as a dialogue writer, as an actor in the role of Akasaraja and as the speaker of the epilogue of the movie.

The story of the film runs like this: Evil dominates the world. The wicked prosper, as the good are made to suffer as a result of the vicious impact of the spirit of the times, the Kaliyuga, presided over by Kalki. To rid the world of wickedness, great rishis hold yagas under the guidance of sage Kshyapa. However, none could be found to eliminate evil and establish virtue. Sage Bhrigu went to Lord Maha Vishnu, enjoying the blissful company of his spouse Sri Lakshmi, did not notice the sage's arrival. Furious, the sage kicked the Lord on the chest. Vishnu without being offended at all pacified the sage and made him realize how anger makes people lose their sense. Sri Lakshmi, however, could not bear all this. In great anger, She left Vaikuntam for the earth below. In search of her, Sri Vishnu too came down to the earth. He took shelter as Srinivasa in the ashram of Vakulamatha. Later, however, Srinivasa met Padmavathi and married her, as everybody knows.

There is an interesting story behind the last scene of the film. After collecting the story material Director-producer Pulliah asked Ramireddi to write the dialogue for the sequence in the last scene in which both Sri Lakshmi and Padmavathi contend for the right to be the spouse of Srinivasa in his presence. Srinivasa, vexed with this quarrel turns into stone. This is not found in any of the source material. It was Pullaiah's invention. Without being aware of it, Ramireddi went ahead with the dialogues according to the wishes of his producer. The dialogues were indeed very effective. Later, however, Ramireddi was astonished when he was told that the scene and the episode were Pullaiah's creation!

The film established Pullaiah as a producer, and the cast Shanthakumari, CSR, NTR, Savithri, Gummadi, Duvvuri, Athreya as artistes of great promise. The film was a spring board especially for NTR. It is his performance in this movie that turned him into the most beloved actor of the Telugu screen and stamped him as 'the screen god'. Admirers thronged in thousands every where behind NTR. Another great man behind this grand success was Pendyala Nageswara Rao, the music director of the film. The song 'Seshasaialavasa..' is heard and sung almost every day in Telugu homes till today. All credit to Pendyala for the tune, and all praise to the immortal voice of Ghantasala for rendering it so evocatively. So in all senses this film is Pullaiah's EVERGREEN MAGNUM OPUS!

DOWNLOAD SECTION
In the below, the movie is contained in a single DVD which is divided into 7 parts and uploaded to different servers
The below files have extensions .001, .002, .003, etc which are to be joined using HJ Split software
(All links are interchangeable)

A Telugu Guy
My favorite Deity is Lord Sri Venkateswara. Mother Tongue is Telugu. I like Lord Sri Venkateswara and love to read or listen about His virtues/glories and He has been protecting me in innumerable ways in all aspects. I can confidently say that, the person who believes in the Lord will have no limits to happiness in all respects. The Lord says that He will even stay away from vaikuntam(His abode) but not His devotees!! I strongly recommend/suggest the ebooks present at http://www.lordofsevenhills.com